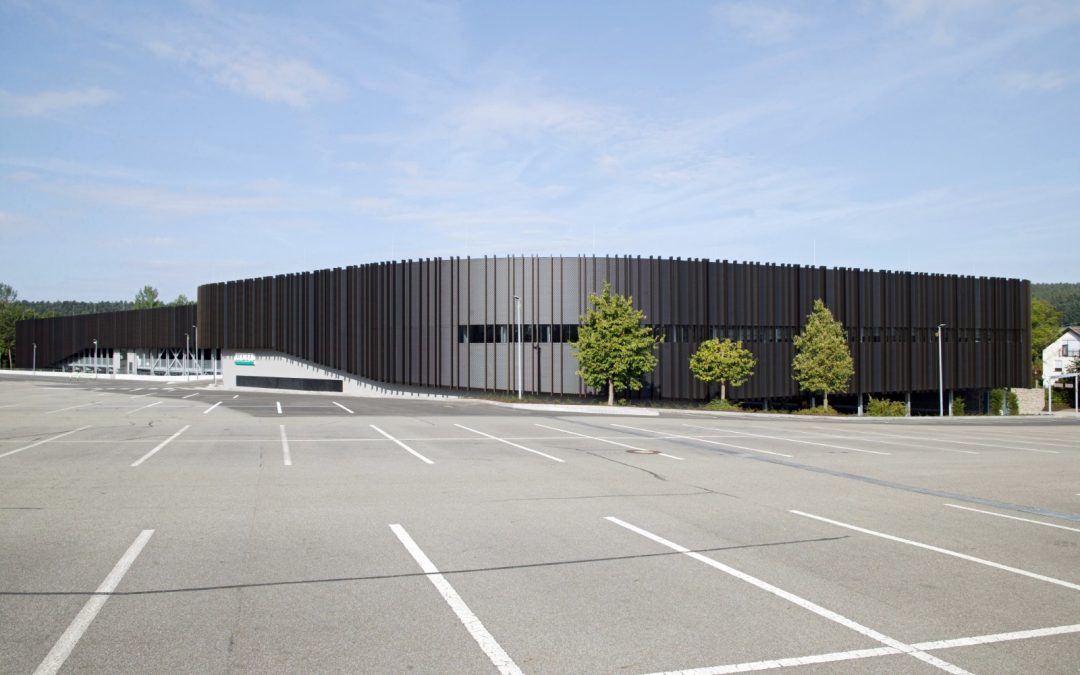 In order to satisfy the rising demand in parking space at the premises of ARBURG GmbH + CoKG an architecturally unique, 150-m-long multi-storey car park took shape over a period of only a few months. In honour of its uniqueness, it was awarded the Architecture Prize “Exemplary Building” by the Chamber of Architects of the State of Baden-Württemberg. The car park design was created by SCHMELZLE+PARTNER mbB ARCHITEKTEN BDA.

The site for the multi-storey car park located to the north of the company’s manufacturing and office buildings used to be a surface car park in a lower lying area. The building was tailored to fit the lay of the land. It comprises a total of 598 parking bays on three levels. 44 bicycle spaces are also available. The upper level is fully covered by a flat roof to protect it from inclement weather. A two-lane, partially heated, full-storey ramp guides users from level 1 to level 2. Level 0 is served by an existing laterally approaching access road.

As the company is operated on a shift basis, access and egress during night time is a normal occurrence. To prevent noise from travelling to the neighbouring residential area, noise reduction was of utmost importance. The entire building is equipped with noise-absorption elements.  To achieve the required smoke extraction cross sections, the noise reduction façade, which envelopes the entire building and is made of aluminium cassettes, was carried out as a curtain wall. What makes this façade so unique is that the vertical, bronze-coloured aluminium pilaster strips are visually enlivened by complementary black expanded metal mesh cladding. Viewed from different perspectives and due to the uneven distribution of the pilaster strips different structures seem to appear. An integrated row of windows with noise reduction glazing in combination with the anodic coating of the pilaster strips creates an interesting play of colours. The choice of dark colours for the façade was based on the idea to integrate the car park into the existing landscape of the Black Forest. Even the height of the car park was unobtrusively designed by making use of the low-lying location.

The statics of the building was dimensioned for the installation of a photo voltaic plant on the flat roof, which covers the car park in its entirety. In the long run, the generated power serves to feed E-charging stations. The car park is outfitted with LED lighting. An emergency power system ensures that safety lighting is always in working condition. A 20,000-litre underground cistern collects the occurring rainwater, which is then used to water the surrounding grounds.

A paved path around the perimeter of the building serves to facilitate cleaning of the facade and other maintenance work.

The car park is equipped with a park guiding system and CCTV. The fire alarm system and the building control system were installed in keeping with the client’s standard.